Home > Attractions and activities in the winter wonderland of Kurzeme

Attractions and activities in the winter wonderland of Kurzeme

Although it is more usual to enjoy the Kurzeme region or Courland in summer, at the maturity of nature, the treasures of Kurzeme are equally wonderful during the winter, with the region becoming a true winter wonderland. In addition, Kurzeme can be very diverse, offering both various active recreation opportunities and peaceful relaxation in nature.

Read the article and find your next adventure! 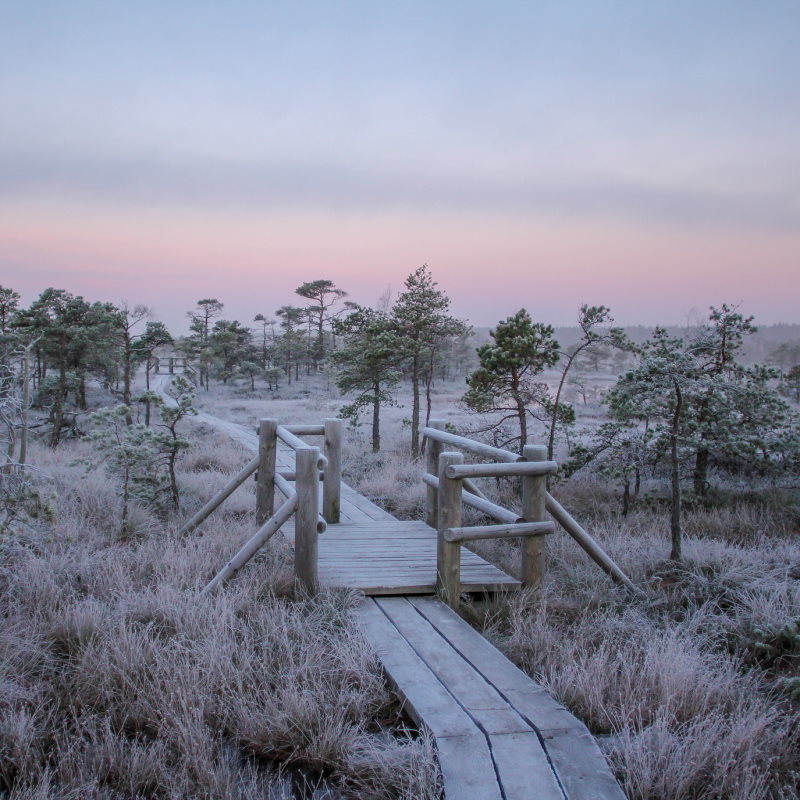 The best way to enjoy the Ķemeri Bog is to take a walk on its boardwalk. The bog is located in Slampe Parish, about 40 kilometres from Riga. Ķemeri Bog is more than 8000 years old and is one of the largest moss bogs on the Latvian coast, characterised by a labyrinth of stretched out lakes, which make the landscape truly special.

There are two paths in the bog, the Big Loop and the Small Loop.

The Small Loop is 1.4 kilometres long, whereas the Big Loop, about 3.5 kilometres long, takes visitors to the viewing tower, from which you can see the small lakes, which look like clear eyes in the vast expanse during winter. As long as the winter day is sunny, we invite you to enjoy the sunset here, as the white snow and frosty air make for a magnificent and very special view.

The old Šlītere Lighthouse from a bird's eye view 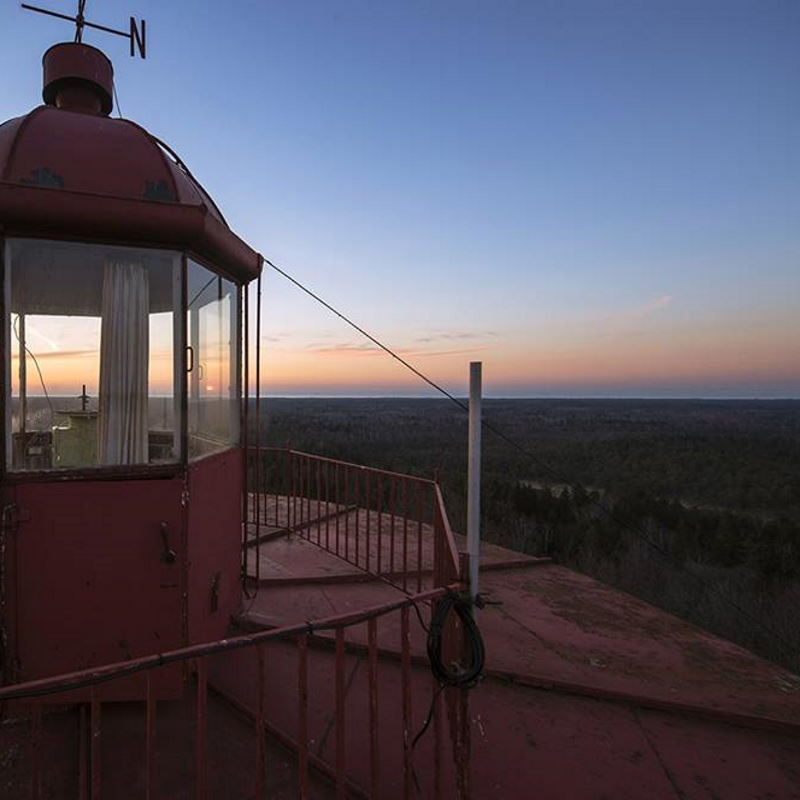 Šlītere Lighthouse is located on the edge of the Šlītere Blue Mountain Cliff, 5.3 km from the sea. Šlītere Lighthouse was built in 1849 by the baron of Dundaga Manor to observe forest fires and provide a day landmark for ships in the Irbe Strait of the Baltic Sea.

The lighthouse operated from 1961 to 1999 and now serves as a tourist attraction. In clear weather, you can see the lighthouse in Saaremaa, Estonia, as well as the Irbene radio telescope and Miķeļbāka Lighthouse, which is almost 30 kilometres away. The doors of Šlītere Lighthouse are open to visitors on Saturdays and Sundays. 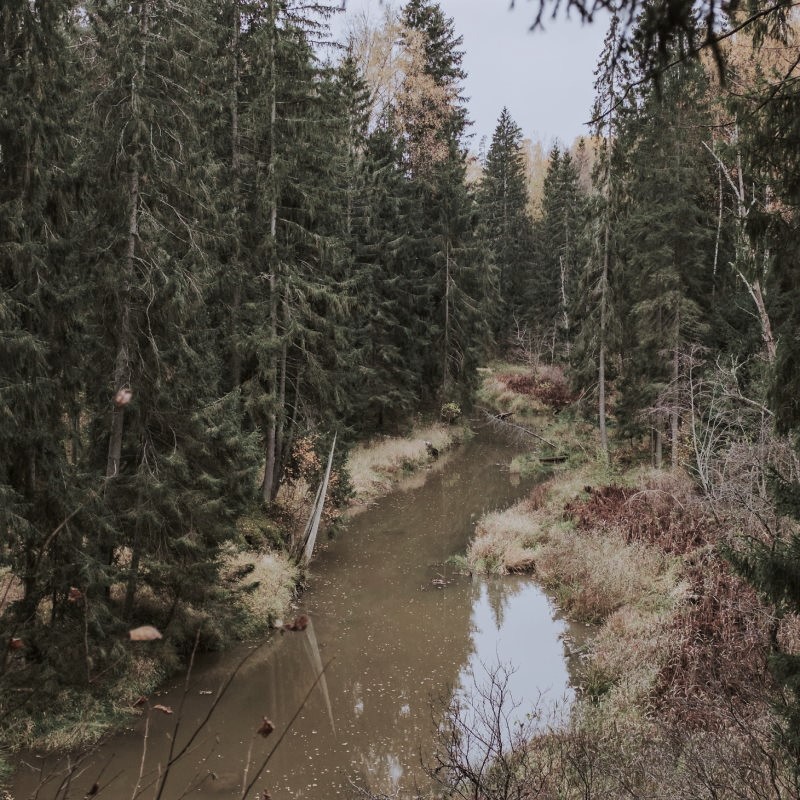 The Viesatas Upesloki nature trail is located in the Tukums region, winding along the banks of the picturesque River Viesata. Here you will not only meet various forest animals in winter, but also find some rather interesting sights, such as unique intertwined trees, 200-year-old pines, sand, clay and pebble outcrops, springs, pig wallows, as well as a specially protected natural object at the far end of the trail, the impressive Spuņakmens boulder.

The massive granite boulder was carried here by glaciers, and it is very impressive in size, reaching almost 2 metres in height and 4.7 metres both in length and width, with a circumference of about 16 metres. The Viesatas Upesloki Trail is a loop with three different routes. If you opt for the longest route to reach the furthest point of the trail and then choose the shortest route for the way back, the total distance will be about 8 kilometres. There are several well-maintained resting areas with places for campfires as well as firewood, so we definitely recommend combining this 3.5-hour walk with a picnic in the fresh air on the banks of the picturesque river! Hiking can be slippery here in the winter, so consider your choice of shoes carefully.

Venta Rapid in winter, a variation on the classic landscape 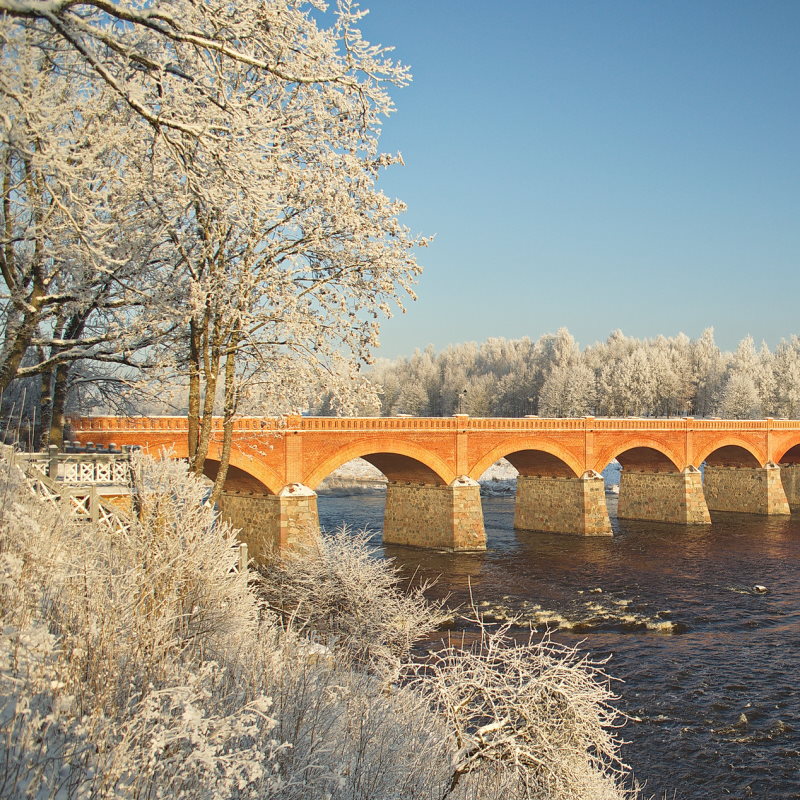 Venta Rapid, the widest waterfall in Europe, is located on the River Venta in Kuldīga and is a true Latvian classic. The width of the rapid depends on the amount of water, on average being somewhere between 100 and 110 metres. The Venta Rapid is a natural monument, part of the Venta Valley Nature Reserve. In cold winters, it freezes completely or partially, creating beautiful and artistic ice sculptures, under which the river waters continue to rush tirelessly.

Next to the Venta Rapid, there is another interesting site, the 7-arch bridge that crosses the River Venta, built by the architect Oto Dīce between 1873 and 1874. Named an architectural monument of national importance in 1998, it is the third longest brick bridge in Europe and the second oldest brick vault bridge in Latvia. A short walk away you’ll find the centre of Kuldīga, which will no doubt captivate with its historical charm!

Find out the secrets of coffee at the Curonia roastery 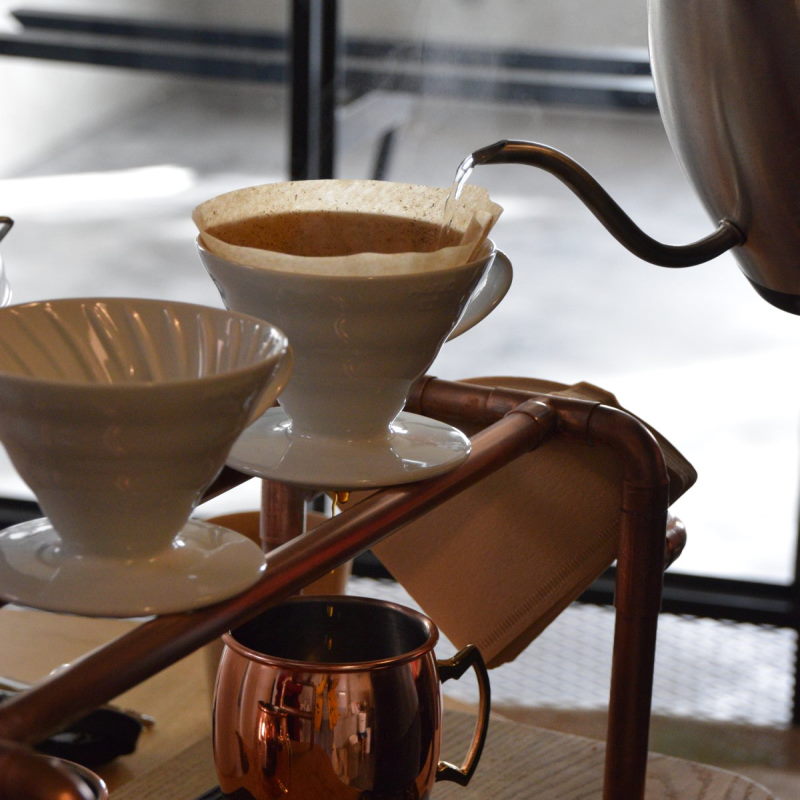 Coffee has been a part of life in Kurzeme since the 17th and 18th centuries, when Duke Jacob imported coffee into Kuldīga as one of the exclusive products, whilst developing trade between Kuldīga and other Hanseatic cities, as well as other farther lands. Nowadays, there is a coffee roastery in Kuldīga called Curonia, where everyone is welcome to learn about the secrets of roasting and enjoying coffee. The coffee roastery will be a great place to stop on a cold winter day for warming yourself up with a cup of delicious coffee and gain some new knowledge! Tours of the coffee roastery must be booked in advance by phone. You’ll find their contact information on their website. 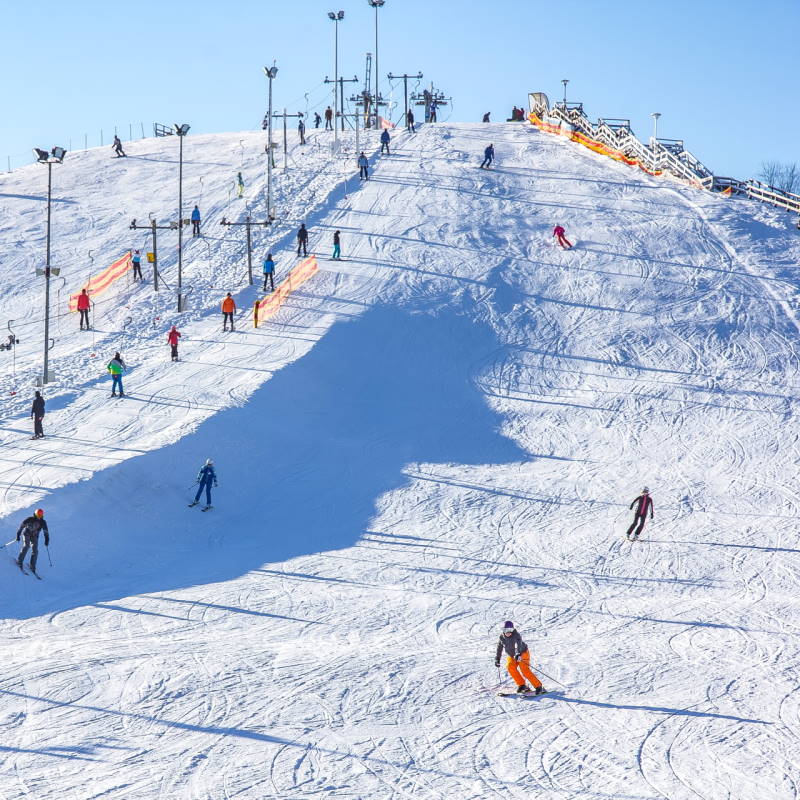 The Lemberga Hūte ski hill offers three pistes of different levels for winter sports enthusiasts, as well as a snow park for the more extreme souls. Other options for enjoying winter sports and beautiful views include the Lemberga Hūte cross-country ski trail and the snow tubing track, which will most definitely be appreciated by the youngest visitors. Equipment rental is available on the ski hill and sleds are available for kids free of charge. There is also an on-site bistro for satisfying your hunger after an active day outdoors. 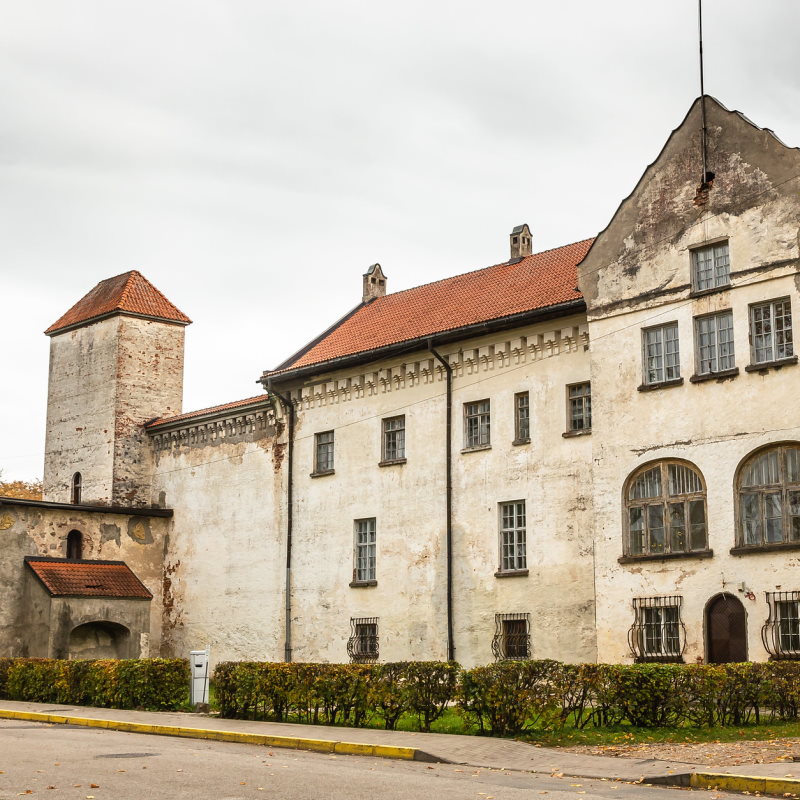 Dundaga Castle is the largest castle in the northern part of Kurzeme, and it is well preserved. Its construction began in the middle of the 13th century; in 1434 it was bought by the bishop of Kurzeme, and from the 16th to the 20th century it belonged to the noble Maydell and Osten-Sacken families. The castle has burnt down twice and been rebuilt several times. The last time that it was rebuilt after a fire was in 1905.

In the castle you can experience a truly royal atmosphere, and one of the exhibition rooms offers a gallery of the former owners of the castle, as well as a small exhibition with photos and drawings of various stages of the castle construction. Dundaga Castle can only be visited together with a guide, and in the winter season booking must be made in advance at the culture centre of Dundaga Municipality.

Although one might think that Kurzeme hibernates during the winter season, waiting for the summer to come and revive the picturesque beaches of the region, this is not the case! In winter, as in summer, the region of Kurzeme offers many activities for all kinds of tastes.

The natural and cultural-historical heritage of Kurzeme is as beautiful as the long woolen skirts of the Suiti wives and rich as the...

This is the time to discover paths less traveled in Latvia, and fortunately we have a lot of them here! We have a lot of beautiful,...
Load more items
print iconprint pdf
Last updated:
06.12.2021