Becki Enright attended The Latvian Song and Dance Festival in 2018 and here is her suggestions and observations on how to truly enjoy this grand celebration.

"I’m Not From Here, But I Felt the Country’s Pride at the Latvian Song and Dance Festival."

There are always elements of a country’s pride that you can easily pick up on when you travel, whether it’s from cuisine, a centuries old tradition, defiance in the face of adversity or even a revered person.

Latvia is no exception; instead its platform of pride is the spectacle of the Song and Dance Festival. This seven-day programme of events in Riga was a unique introduction to the city, and a special insight into how Latvians come together in unison. 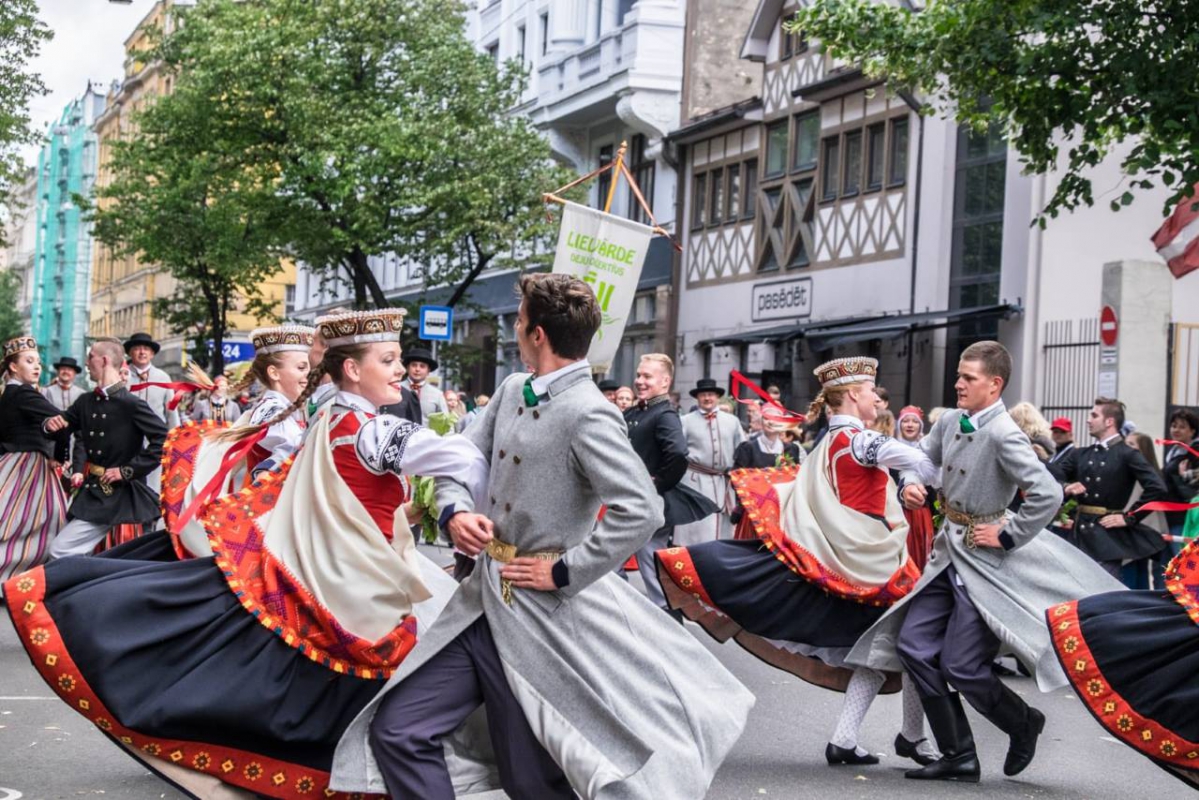 While my pilgrimage to the grand event that takes places only every 5 years in the capital wasn’t that of a homecoming or a celebration of what is my home, I was still able to be a part of it and witness what it means to be Latvian.

When a nation unites, it wants nothing more than for everyone to see it.

The festival’s history stretches far back

The Latvia Song and Dance Festical has been a cultural traditional since 1873, starting out as a form of assembly at a time of the year where country folk downed their farming tools to celebrate life. Even when people fled the country during WWII, Latvian song days were organized, even in the displaced persons camps in Germany. 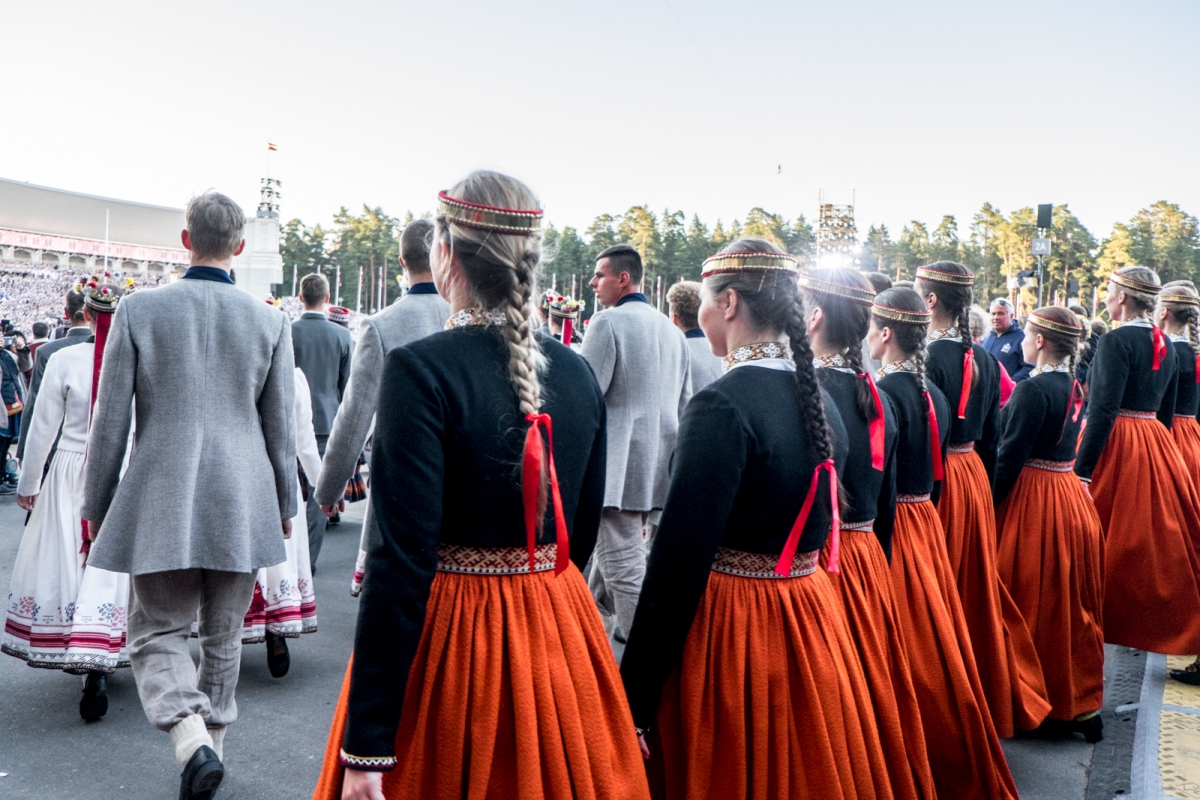 It grew from a singing platform into a nationwide ritual, later mixed with the glory of traditional dance, becoming so important that it was included in the UNESCO List of Masterpieces of the Oral and Intangible Heritage of Humanity in 2003.

The festival gathers thousands of participants

Its ceremonious grandeur is made up of 43,000 Latvians from 118 municipalities rejoicing with Latvians coming home from abroad just for this event, to showcase their national identity. The 2018 edition of the Song and Dance Festival also coincided with the Latvian Centenary, which made the celebrations of this particular year even greater and more meaningful. 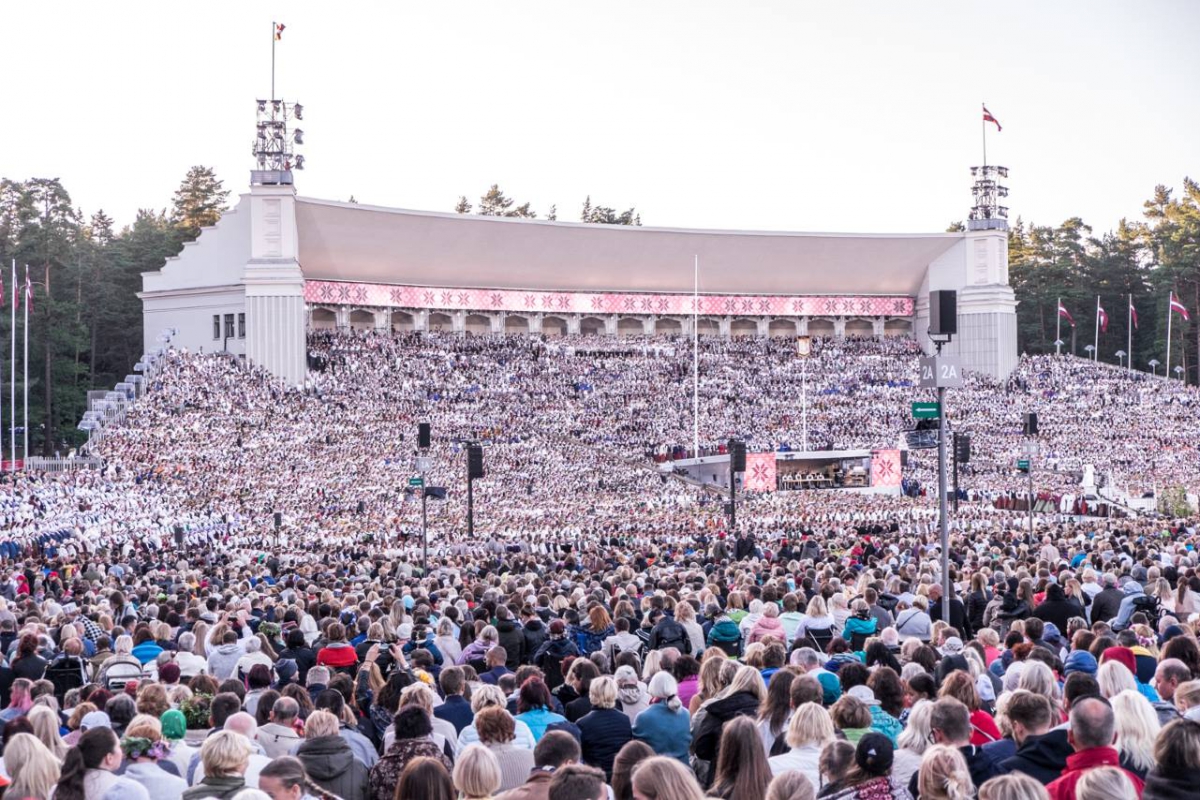 As for me, I was one of around half a million spectators who watched on, attending highlights from the 60 cultural and traditional events that filled the city from morning to evening and leaving with a better understanding of Latvia, its history and its people. 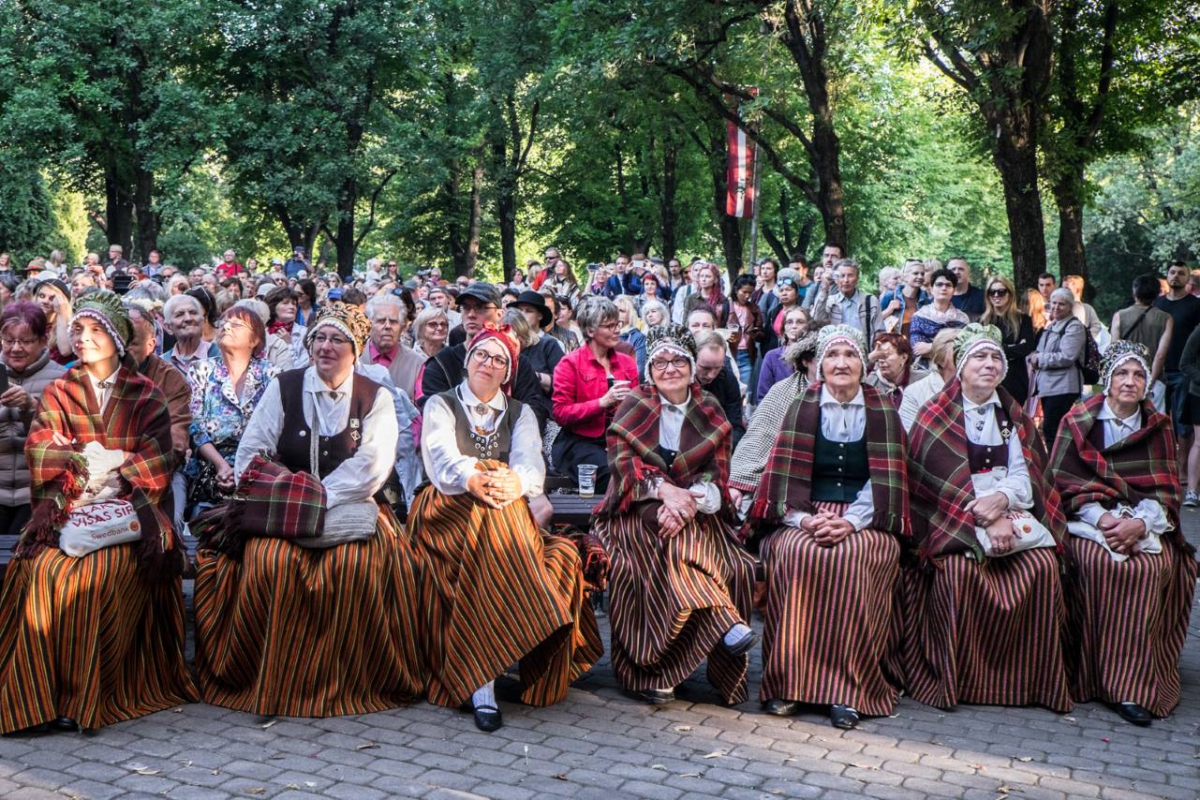 It started with the Participants’ Procession where I stood within the crowds at this five-hour long street parade. It’s where hundreds of folk costumed choir and folk dance groups make their way from the Freedom Monument on a route through the city bursting into song and dance, cheering and waving flowers. 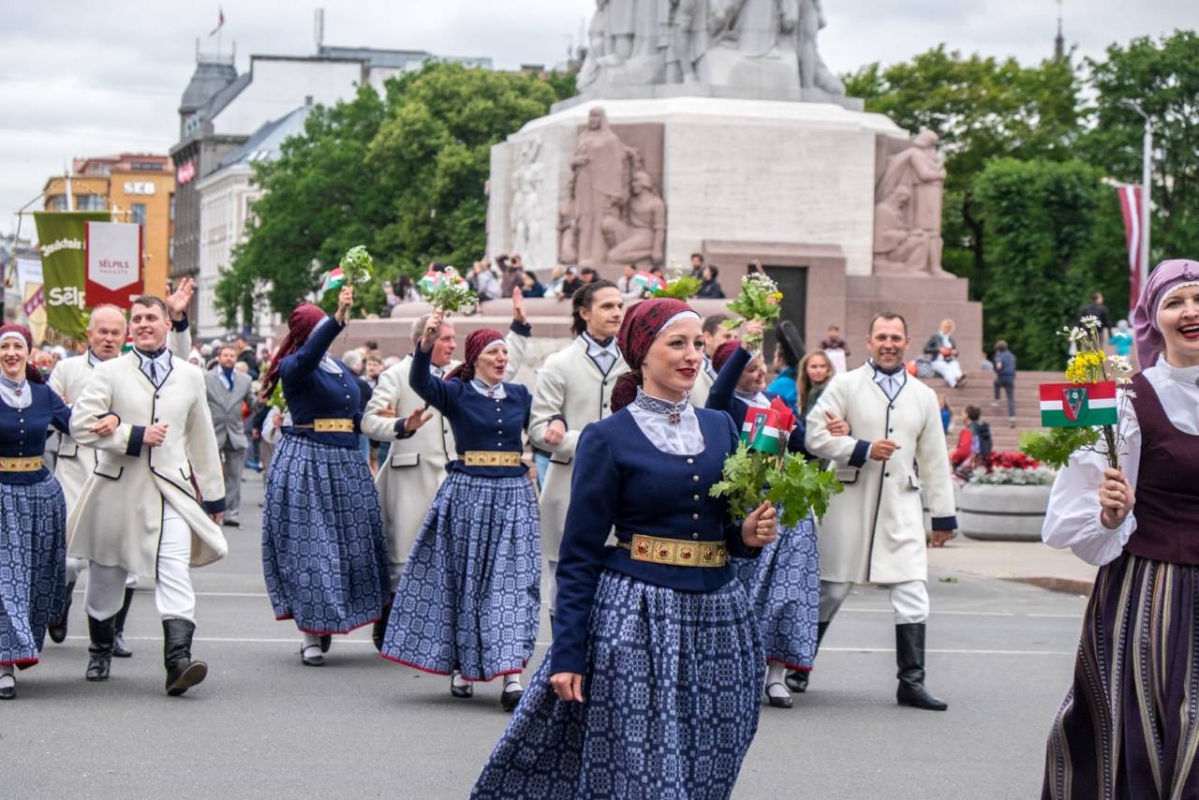 Representing the cultural regions of Kurzeme, Vidzeme, Latgale, Zemgale, Sēlija and Rīga, followed by Latvian diaspora and expatriates groups from abroad, each group proudly displayed their regional symbols and performed to the appreciation of those on the sidewalks looking on.

Cheering, shouting, clapping and the clattering of paper fanfares, Riga’s streets rumbled in excitement, ready for the week of events ahead.

Concerts pop up all over the place

I watched theatre shows and choir competitions, enjoyed wood band concerts before sundown as the sounds echoed through the park and heard different kinds of folk music performances on small park stages celebrating multiculturalism in a bubble of togetherness. 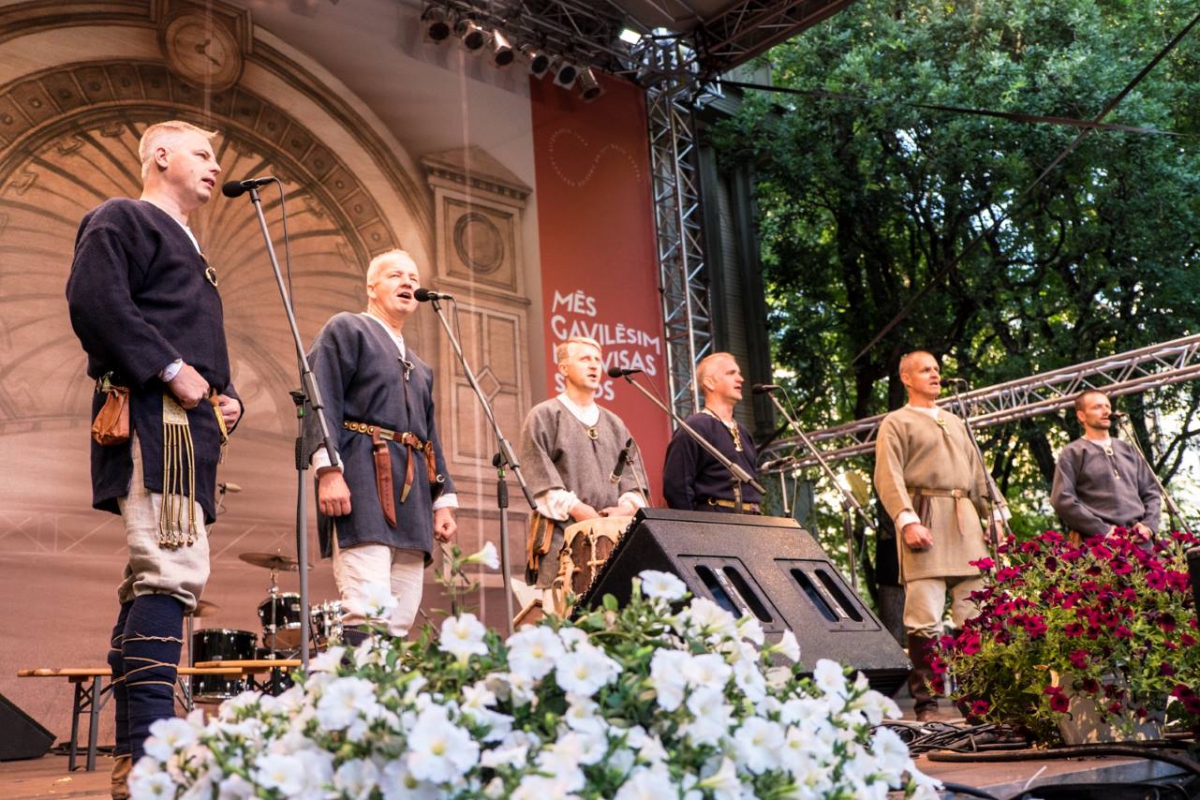 These were days of song and dance where over 1500 people from one hundred culture groups were given a stage to shine a spotlight on their own unique heritage.

A chance to show off our folk costumes

I saw a ‘traditional folk costume showcase’ on a modern catwalk, where Latvian fashion designers showed off folk costume designs of timeless style. This form of dress is just as important to the festival as the song and dance elements as a form of Latvian regional representation. 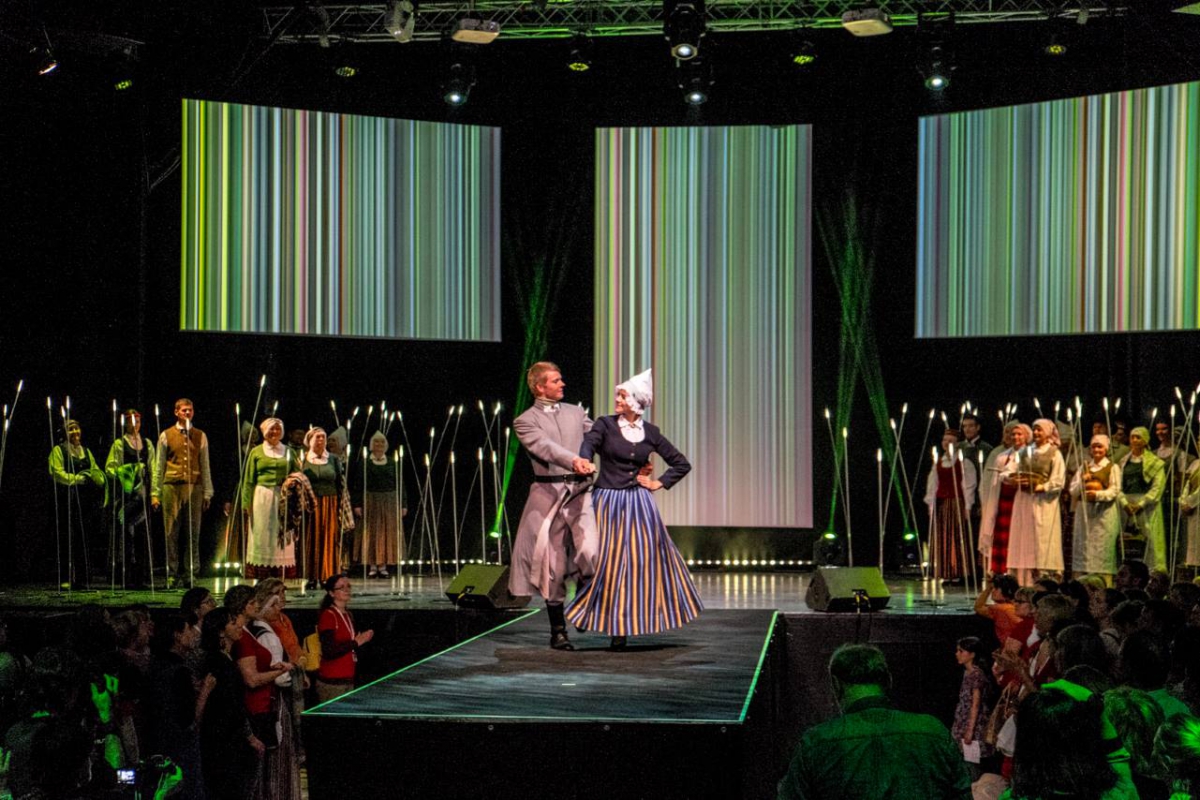 Many Latvians own traditional dress from their homelands, saved for special occasion. Keeping it at the fore of the fashion industry only serves to keep tradition alive. 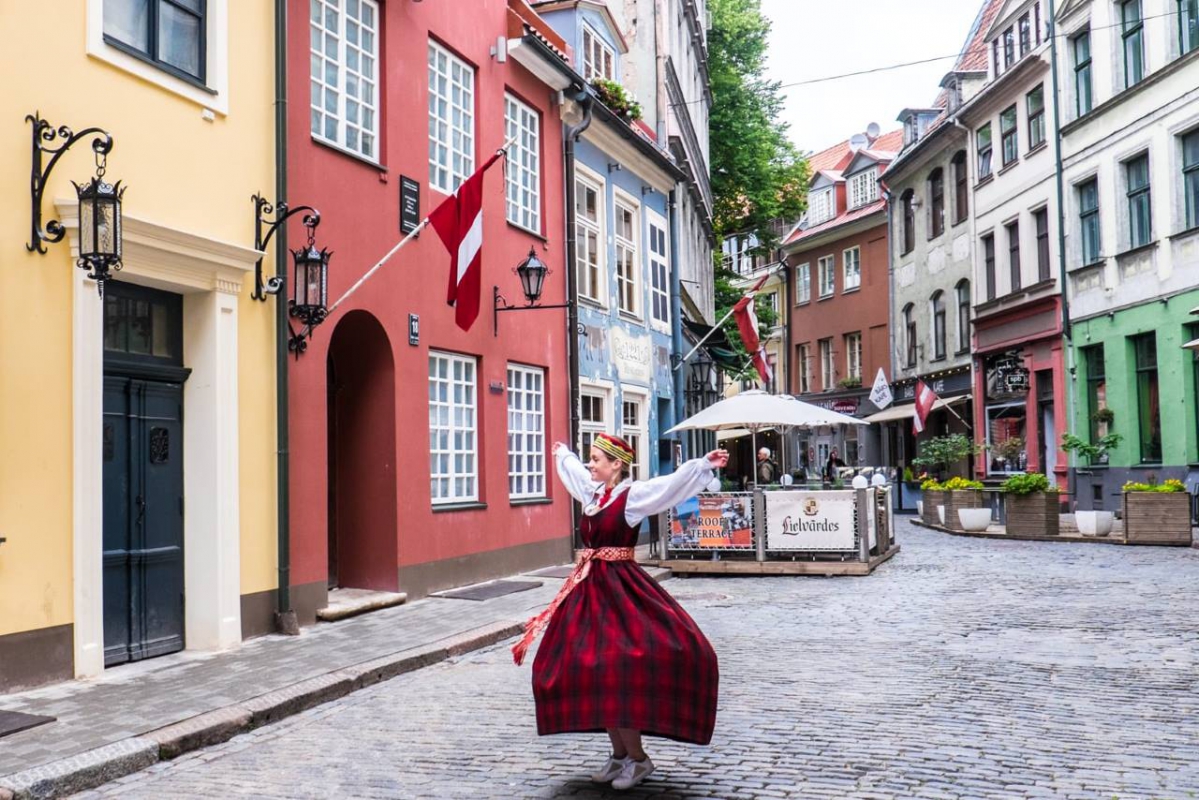 There was no better time to try it in Latvia than during the Song and Dance Festival and having the opportunity to connect with the people. The Senā klēts folk costume centre in Riga Old Town dressed me in delicately woven white blouse with a broach, a deep red tunic finished off with a traditional belt stitched with Latvian symbols and a red ribbon in my hair, before I took to the cobble-stoned streets for a photo shoot.

Local food is a great addition to the festival

I would round off the day trying Latvian cuisine from either the festival’s pop up restaurant of 10 of Riga’s food and drink establishments with contemporary takes on Latvian cuisine, local eateries or neighbourhood food markets and festivals. And if you can’t make it to every show and mix event fun with sightseeing, there are big screens scattered throughout the city live streaming the events daily. 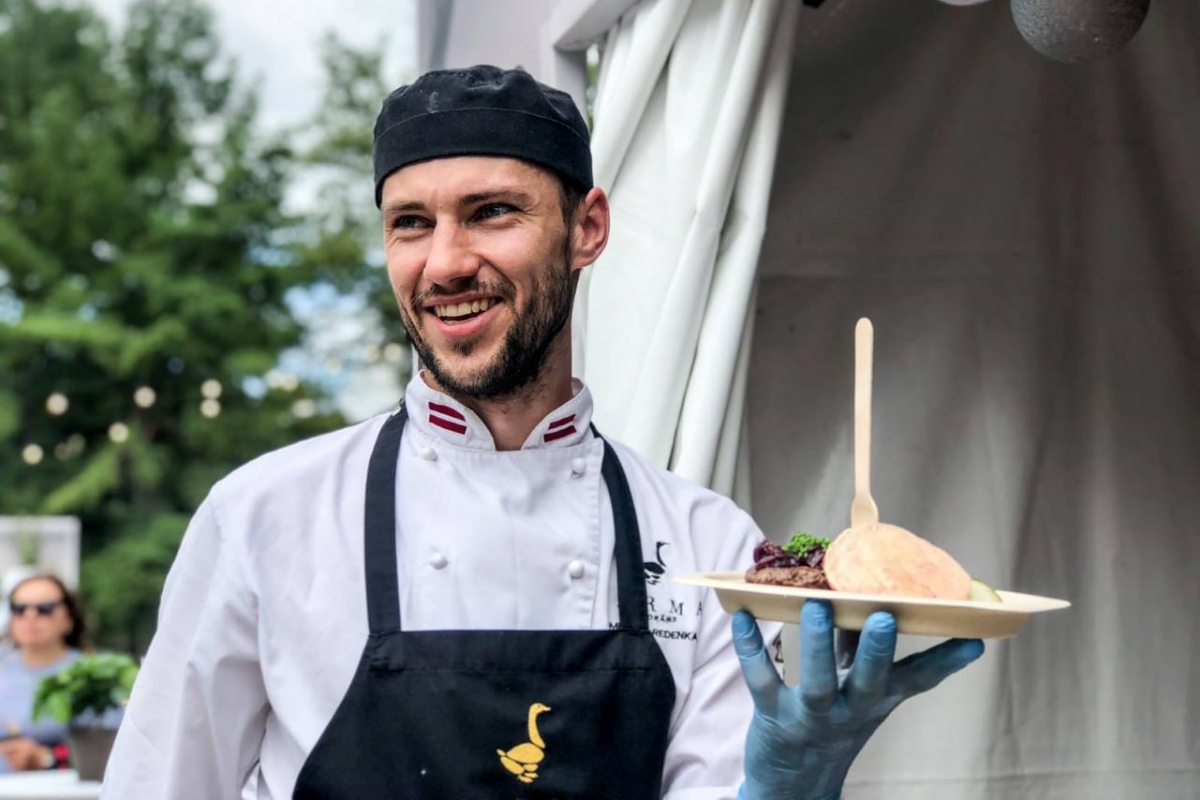 My favourite events were those that Latvians wait all week for too – the gigantic, impressive masterpieces of movement and sound. Both the opening Great Dance Performance (2018: Māra’s zeme ‘Māra’s Country’) and the Closing Concert (2018: Zvaigžņu ceļā, ‘Following the Starry Path’) are a badge of honour for Latvians. 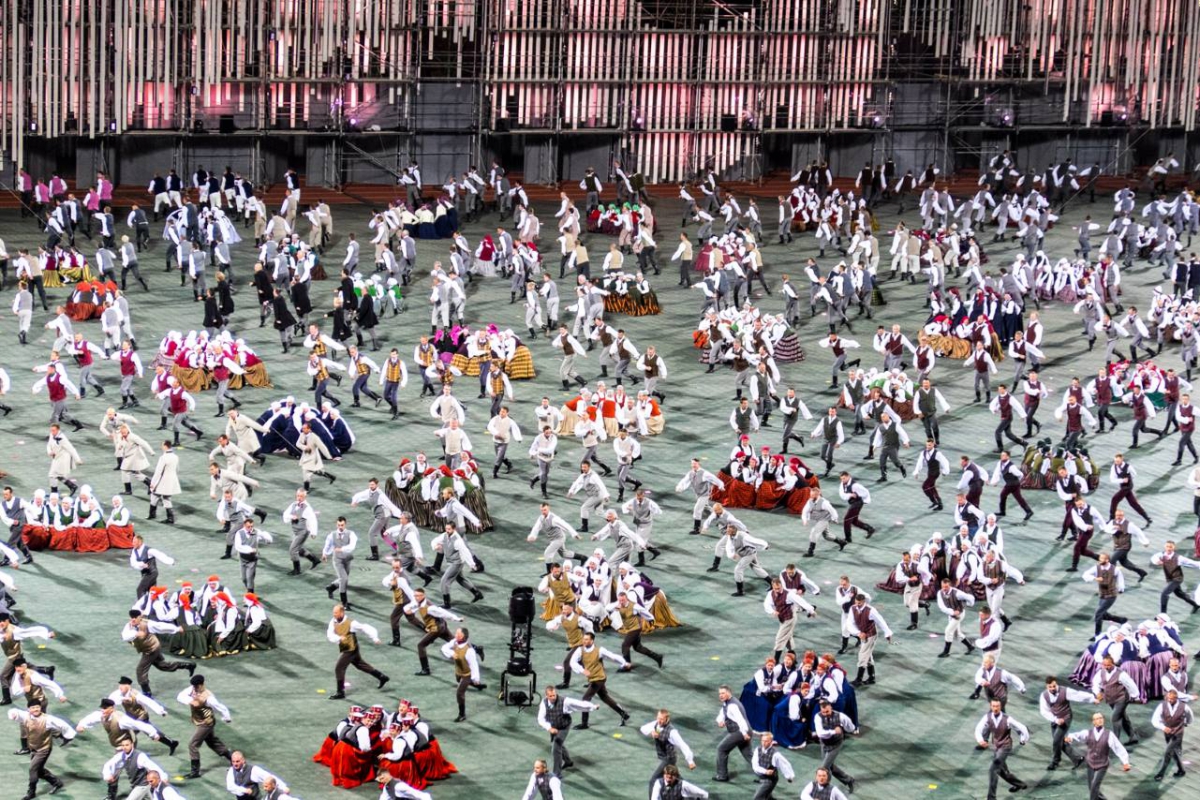 The ‘Dance Festival’ element has been a part of the festival since 1948, where over 10,000 people fill the Daugava stadium to watch 17,000 folk dancers perform stories of Latvian history and its cultural elements via dozens of dances.  Hours of folk costume colour and choreography, swirls and steps to the precise tempo of song make for an unforgettable performance.

Everyone wants to be a part of the closing concert at the Mežaparks Grand Stage, and if you can’t get a seat you can find your spot within the pine forest that surrounds it instead. No matter where you were standing, you can hear the sounds of the 38 songs performed by the 427 choirs and an accompanying orchestra that bellows from the stage over a three-hour period. 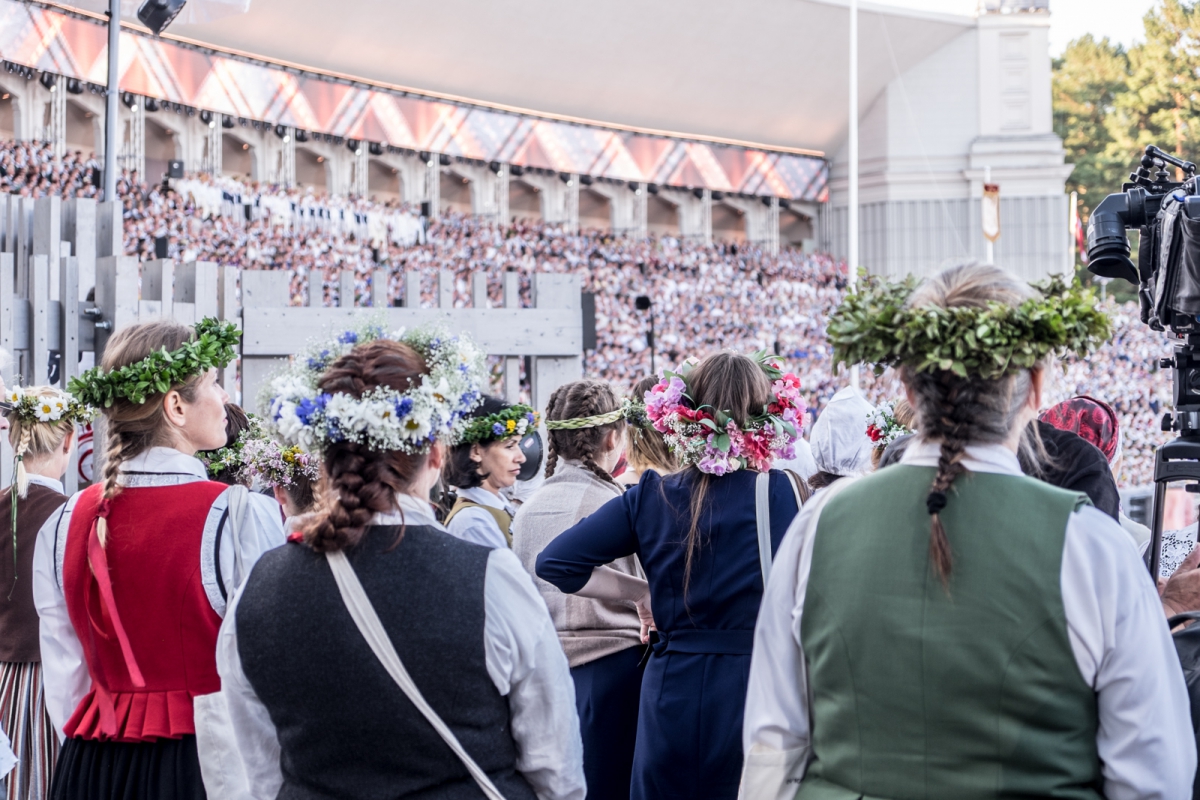 There may have been 16,000 singers and 18,000 folk dancers on a platform that evening, but there was only one collective voice bringing Latvian people together.

Especially when the National Anthem played and each and every Latvian standing within the crowd joined in. And when this event turns into what is known as “the largest choir in the world” when at midnight the crowd continues to sing with those on stage well into the night. 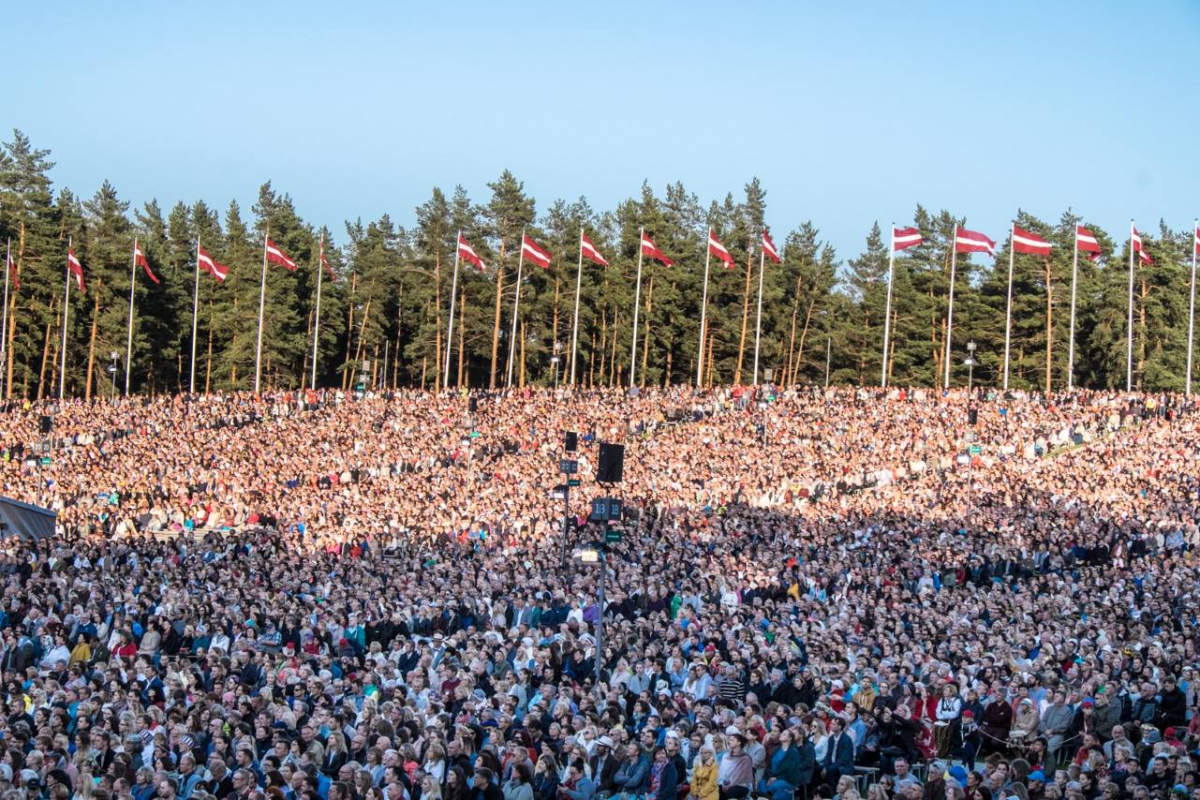 More than a festival to Latvians but a showcase of culture and tradition to the world, it’s no wonder the Song and Dance Festival is considered one of the best festivals in the Baltic region. It’s certainly worth the five-year wait, to celebrate the life of Latvia. 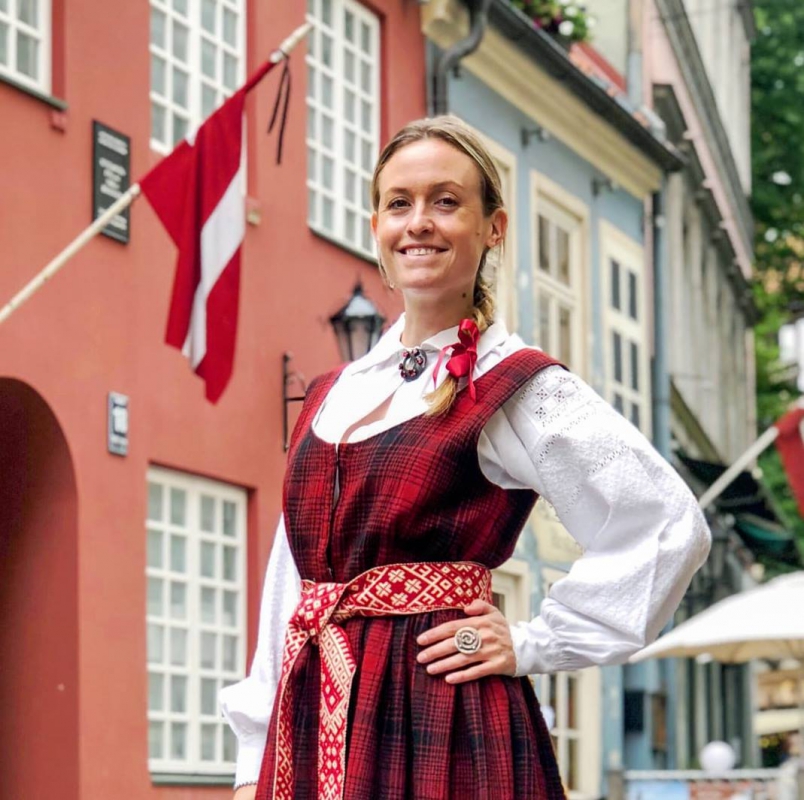 Becki Enright of Borders of Adventure who attended The Latvian Song and Dance Festival in 2018.

Do not miss the most Latvian holiday of all – Jāņi or "Līgo!", the night from June 23 to June 24 (in harmony with the summer solstice),...

Every five years, for one week. This is the time frame for THE main event in Latvian cultural life - the Nationwide Latvian Song and Dance...

Every five years, for one week. This is the time frame for THE main event in Latvian...